Sure, Jimmy is funny, but he’s got a heart for the people, too.

And in his first run for political office, Jimmy Tingle won an impress 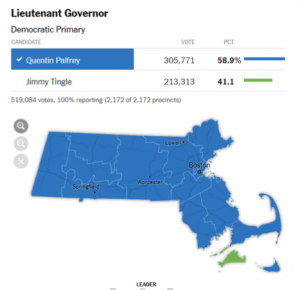 ive 41.1% of the vote. It wasn’t enough to put him in the Lieutenant Governor’s seat, but it was confirmation that his positive campaign message and unconventional perspective resonated with the people of Massachusetts. Jimmy built his campaign around the idea that Government Matters and that Government Can Change People’s Lives. Inspired by his working-class background and early life struggles, Jimmy ventured solutions to some of the state’s toughest problems – better resources for people with addictions and criminal records and revamped funding to improve education and public transportation in the neediest communities.

Along the campaign trail, Jimmy inspired the crowds with talk of real solutions that are both practical and feasible; real resolutions that will demand an alliance between the “public mission of government and the innovation, ingenuity, and efficiency of the private sector.”

Jimmy’s no stranger to politics. He’s a seasoned Democratic activist with a master’s degree in public administration from Harvard University’s Kennedy School. He’s been a respected political humorist for more than 30 years, has delivered wry political and social commentary on 60 Minutes II, and was a contributor and satirist for MSNBC. A comedian with keen political insight, Jimmy’s humor tends to poke gently at the absurdity, orchestrating dialogue in place of division.

Jimmy resumed his entertainment career after the election but remains politically active with the hope of steering positive change through his personal appearances and new organization Humor for Humanity which aspires to use his performances to raise spirits, funds, and awareness for nonprofits charities and social causes.

Upcoming shows, news, occasional free tix & discounts - will never be traded, sold or compromised.
Give it a try, you can unsubscribe anytime.
Navigation Menu