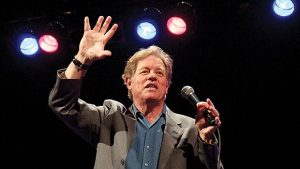 Jimmy Tingle pulled no punches on Trump during stand-up routine

Captivating his audience of 1,100 over two hours with one intermission, Tingle pulled no punches in his assessment of the new president’s first two weeks in office. Cathartic in its exposure of the absurdities, follies and human toll of Trump’s decisions, Tingle’s humor had bite but not bitterness. If there were Trump voters in the audience, they had no cause to feel unwelcome. Tingle focused not on the man but on his actions.

Outfitted in an unbuttoned jacket and plain tie, like a slightly rumpled office worker, Tingle demonstrated his mastery of stand-up art, with his timing, pauses and use of his entire body and voice to morph into various characters. One was his 93-year old aunt, shopping for medical treatment in a privatized health care market, as she phoned a friend and in a wheezing voice said, “There’s a special on hips today … shall we go?”

Later, he mimicked a border control officer calling his boss to report the arrival of a Palestinian Jew with 12 followers, making the point that with the new restrictions on refugees, even Jesus would have a hard time getting into the USA.

Tingle’s only prop was a podium. He used it only once, to read out the names of the 20 nonprofits the show was supporting with a portion of the ticket price.

Tingle’s website describes his “Humor for Humanity” project as a “social enterprise and solo show…which aspires to raise spirits, funds and awareness” for social causes. Its brand of humor is “entertainment for a purpose beyond itself, to celebrate people doing good work that demonstrates “who we are and who we aspire to be.”

A comic with an amiable rapport and an eye to injustice and hypocrisy, Tingle, 61, has had a long career spanning TV, radio, film and stage, and from 2002 to 2007 ran his own theater in Davis Square, Somerville — a revered club-scale venue for live shows. In 2010, Tingle earned a master’s degree in public administration from Harvard’s John F. Kennedy School of Government, which borders Harvard Square, where in the 1980s he got his start in standup as a street performer.

The multigenerational audience clapped to its beat.

By way of introduction, Tingle opened the show with a video of his short and funny commencement address for the Kennedy School, a mix of ideals and autobiography. Tingle spoke of struggling to learn statistics in a tutorial with students from countries at war with one another. “We all helped each other,” and adding a nod to his thick Boston accent, added, “we all spoke English as a second language.”

Tingle then strode on stage and began by commenting on the beauty of the grand gothic hall, a memorial to Harvard men who died serving the Union in the Civil War. He slowly named people who have spoken on this stage: “Winston Churchill. Franklin Delano Roosevelt. Martin Luther King. John Fitzgerald Kennedy.” He paused, and then in a wobbly voice, added “Tingle,” earning his first roar from the audience.

Turning to the topic at hand, Tingle said, “It’s going to be OK.” Quoting Martin Luther King from his August 1967 speech to the Southern Christian Leadership Conference, Tingle said, “The arc of the moral universe is long, but it bends toward justice.”

“This is a long game,” Tingle said, before reflecting on the new president’s first two weeks in office. He expressed admiration for candidate Trump’s ability to speak with New Hampshire voters about painful local issues, including their state’s opioid epidemic.

Tingle underscored the cyclical nature of progress by taking three steps forward while noting a positive change and then taking three steps back as he pointed out a reversal. Stepping forward, he said that 22 million people gained health insurance thanks to Obamacare; retreating, he noted its impeding repeal. Conjuring a surreal, hilarious chain of events related to dismantling air traffic control, Tingle described forest rangers with flashlights landing planes over Walden Pond.

Saying that Trump had promised to “drain the swamp” of entrenched players in the nation’s capital, Tingle described the president’s incoming cabinet as “the Everglades.”

Tingle noted that the new leader of the Environmental Protection Agency has denied climate change, and Rick Perry, Trump’s pick as energy secretary, pledged to dismantle the Department of Energy when he was a presidential candidate. His job will be easy, said Tingle, mimicking Perry answering the phone by saying, “We’re closed.”

Describing former presidential candidate and surgeon Ben Carson as “the mellowest man in America,” Tingle noted the experience Carson touted as he prepared to head the Department of Housing and Urban Development: He lived in public housing as a child.

“My father drove taxis in Cambridge,” said Tingle. “But don’t make me secretary of transportation. It’s like someone who has never served in government becoming president.”
Tingle raised another round of laughter by simply stating the name of Steve Bannon, Trump’s chief strategist and impresario of fake news.

Commenting on Trump’s suspicion of voter fraud and insistence on a formal investigation, Tingle said, “He wants to figure out how the hell he won.”